Behind the scenes of an interpreter’s work 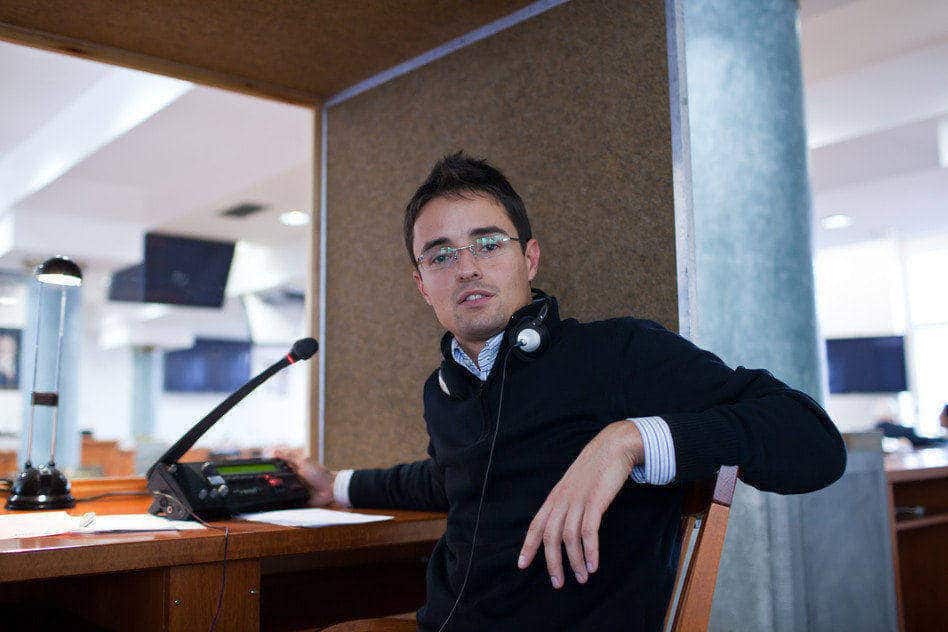 Interpreting – Microphone and switchboard in an simultaneous interpreter booth

The list of conditions to be fulfilled by a candidate for a good interpreter does not end with the knowledge of a foreign language. Apart from that, what counts is a great reflex, resistance to stress and pressure, high mobility and availability but first and foremost, the skillfulness in transferring the code. Additionally, one should also be prepared for “surprises” that may appear during work performance.
And these may result in considerable nervousness, that is why only recognized and experienced interpreters are allowed to interpret the statements of great personalities in real time. Witold Skowroński, PhD , a conference interpreter with the accreditation of the UE and the head teacher of the School of Translation, Interpreting and Languages at Adam Mickiewicz University in Poznań, who interpreted, inter alia, Pope John Paul II and Pope Benedict XVI, Polish and American presidents as well as members of the royal families, reveals for “Gazeta Wyborcza”: “After an astronaut and a pilot of a military jet, a simultaneous interpreter is the most energy-intensive profession in the world. And then, he immediately adds: “A professional interpreter ensures a high quality of interpretation ca. 30 minutes maximum. After this time the work is taken over by the interpreter’s substitute , but despite the break, the first interpreter cooperates when there is a need.

2 seconds for a decision

The speeches of politicians being read out from a paper are rarely subjected to current modifications, that is why their interpretation is easier. A different thing is a speech delivered in front of an assembly, where the purpose of a speed is to convinc the assembly to an idea. Especially charismatic politicians often change the voice intonation, interject additional thoughts, stop in mid-sentence to begin this sentence better or.. never finish it. An interpreter, in the process of an immediate selection of words, has the task to draw the audience’s attention to what is most important. In the industry, a story is often told about how brilliantly Skowroński rescued the situation during his interpretation. In Japan he was interpreting Lech Wałęsa making a speech, who at a certain point compared Polish communists to radishes, red outside and white inside. Mr. president did not notice the fact that the Japanese kind of radish is white outside as well as inside. Skowroński made a decision within 2 seconds, he compared communists to prawns, which “saved” president’s punch line.

If Skowroński had interpreted that cited speech in a consecutive way, he would have had more time for inventing a better comparison. Consecutive interpreting is when a speaker first delivers a certain fragment or the whole of a speech and then relies on an interpreter, and the interpreter performs his job in blocks, making the notes on the way. Simultaneous translation, on the other hand, is called synchronous because an interpreter simultaneously interprets a speaker’s statement into a target language , often working on a few square metres being separated from others by a booth. In the case when an interpretation takes place in the presence of few individuals, the so called whispered interpreting (from French: chuchotage )is practiced. An interpreter interprets simultaneously in a low voice, so as not to drown out the speaker – it demands from him a great strain of his vocal cords.

As the work of an interpreter demands high concentration, it must be performed in special conditions. In the conference rooms at the top of them there can be noticed seats for the audience or small “boxes” at the side of the stage. These are booths equipped with translation equipment in which one or two interpreters work interchangeably. The ISO standards set the exact size of these spaces (the walls are to be min. 2.5 m wide, 2.3 m high, 2.4 m long), their location in the hall (so that the interpreter could see the speaker, the visual materials and that he could embrace the audience), accessibility, (the ease of entry), soundproofing, air conditioning, lighting (separated from the lighting in the hall), windows (with anti-reflective coating), equipment that includes consoles, general work conditions (the possibility of taking notes) cables layout, and even chairs. Certain type of isolation is used so that an interpreter is not disturbed by murmurs, laughs, comments from the audience and also by the spectators constantly entering the hall.

As confirmed by interpreters: this occupation is pursued with passion. Each commission requires time consuming preparations, reviewing the vocabulary from a particular topic, getting acquainted with the current situation in a specific sector as well as working intellectually for severalhours “at full capacity” – often away . Supposedly, the satisfaction is worth it.